During late spring and summer of 2003, a cross section of community soccer volunteers enter into discussion regarding the possibility of major Hilo Bayfront soccer field renovations. The group considers making an application to the United States Soccer Foundation for grant support. We miss the Fall grant application deadline. In spite of this, a positive outcome emerges. An indoor soccer tournament is proposed as a means to demonstrate cooperation between the range of local soccer organizations: AYSO, Ha’aheo S.C. (HYSA), Hilo Makule League, Men’s League, Women’s League, and the Hispanic-American Soccer League.

Initial Edith Kanakaole Stadium (EKS) deposit to secure the facility was provided by Barbette Navarro, a Ha’aheo Soccer Club volunteer. AYSO Region 274, Hilo advanced the initial EKS rental, upon the condition that the tournament or tournament committee would guarantee reimbursement, should the tournament fail. The tournament is restricted by the County regarding existing floor marks which delineate three tennis courts. Since we could not modify or change the floor marks we decided to adapt. The miniBig© tournament was born out of necessity and in true soccer fashion, made the best out of the situation at hand.
The first tournament took place February 28th and 29th, 2004. Opening day of the tournament Hilo was “socked in”. It had poured all night long. Flood warnings were up, in fact around the island. It was one of those rare days when all outdoor activity in the County was being cancelled due to rain.
Except for a small leak which dampened a spot at the edge of the center court EKH was dry. The tournament was able to start as scheduled. It was soon apparent to everyone that the ability to play indoor soccer when conditions outdoors were less than optimal was a great thing.

The eight participating teams and group of AYSO U10 and U12 youth who were invited to scrimmage discovered by the end of the tournament that the miniBig© with it’s 4 vs 4 and 7 vs 7 format was an exciting local style improvisation on the basic Futsal concept. In the first year there were only two official divisions: U14 and U16/19.

Futsal is the international term used for the game and is a conjunction of Spanish or Portugese words. Soccer “futbol” and indoor “sala”. The game is typically played indoors on a basketball court without the use of sidewalls or dasher boards.

The National Boys and Girls Clubs adopted the sport and it is now played in over 1,100 clubs throughout the continental U.S. The AYSO national organization has also played the sport in a close working relationship with the U.S. Futsal organization since 1988.

The Hilo miniBig© was established to promote local soccer and is part of a larger drive to secure funding through the United States Soccer Foundation and regional sponsors to develop a series of premier outdoor/indoor fields for youth through adult players on the island of Hawaii.

Almost immediately following the conclusion of the first tournament attempts were made to reserve EKS for a 2005 miniBig©. As it turned out this would not be a straight forward proposition. The EKS facility supports a wide range of special events that occupy many week-ends throughout the year. The Merry Monarch Festival, Christmas crafts fair, auto, trade, and orchid shows, graduations, and so on. With diminishing availability for indoor tennis – a sport for which the Multipurpose facility is specifically attuned, the County was not inclined to support the addition of another annual event. It took several months of negotiating, but by late Fall 2004 the miniBig© was allowed to reserve April 14 and 15, 2005 for the 2nd annual tournament.

In mid- December 2004 the tournament is contacted by the University Hawaii Hilo Graduation Committee. The dates reserved by the miniBig© are needed for UHH Spring graduation. An agreement is reached. The tournament gives up its dates for UHH graduation in exchange for use of the UHH New Gym. New dates are established for the 2nd Annual tournament: April 1 – 3, 2005.

Club Futsal a Registered Independent Student Organization (RISO) assumes major sponsorship for the tournament. Club Futsal as a UHH RISO is able to utilize the New Gym without charge and in addition provides $1000 for referee services and $200 for the purchase of tournament game and trophy balls.
Kamehameha Schools Athletic Department allows the tournament to borrow two pair of indoor Kwik goals. The Communities of Christ Church provides housing for one of the visiting Kona teams. Eurosport – the fabled soccer traders, provides a number of give away items, including t-shirts, balls, stickers, and catalogs.

The registration, initially was very slow, but by tournament day the miniBig© has tripled in size from the previous year. Twenty four teams in four (4) Divisions: U10, U14, U19/Collegiate/Adult Women, U19/Collegiate Adult Men. With teams participating from around the Big island.

The game was changed to strictly 5 vs 5 format, with no splitting of teams into mini-squads. Teams played a total of 3 – 25 minute matches, followed by and single elimination tournament play (regulation 40 minute futsal game).

The Adult Men games were especially exciting to watch. Camilo Ramirez’s Kona Soccer Club and Richard Handy’s Hurricanes played with great intensity. At all levels it was very interesting to see the continued development of ball handling and skill.

Games for the most part happened right on schedule. Mike Robinson did an outstanding job assigning referees.

First order of business following the tournament was to schedule our dates for 2006.

Unlike last year, the tournament encountered no problems scheduling dates for 2006.

A decision was reached by the tournament committee go back to the original miniBig© format – with some additional refinements (3 vs 3 and 5 vs 5; limit team roster to 10 player), and to increase the number of Divisions in order to better balance play at the different levels. Better balance; greater safety for the players.

Anticipate more players from around the island look forward to participation by an adult men’s club team from the Phillippines. If things go as planned there should be (8) Divisions: U10 and U12 (all boy, all girl, or coed); U14 Boys, U14 Girls; U18 Boys, U18 Girls; Open Men; Open Women.

Game format: each registered team guaranteed to play six (6) 3 vs.3 – 15 minute matches on the small pitch using Pugg Goals (no keeper); and at least one (1) single elimination 5 vs.5 – 40 minute match on the full pitch with regulation Futal size goals (with keeper).

We are actively seeking sponsorship to do things to improve the tournament overall.

To date, Ken Cameron of Hilo Guitars and Ukuleles has stepped forward and has purchased Pugg Goals for the Hilo miniBig© International Indoor Soccer Tournament.

With your help we can continue to develop a first rate indoor soccer tournament experience, and advance the plan for future development of a soccer training and tournament complex serving the island of Hawaii. 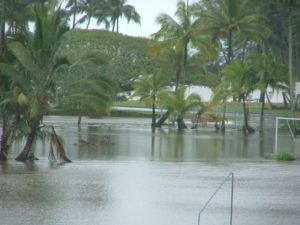 Formal sanction of the 4th Annual Hilo miniBig© Indoor Soccer Tournament through US Club Soccer (USCS) and the Big Island Soccer Organization league (BISO-HI) represents a major development for youth soccer on the island of Hawaii. Through the persistent efforts of G. Joe Pries, President/Director of Coaching, Kona Soccer S.C. the cementing of relations with US Club Soccer and the formation of the BISO-HI league was established in December 2006.
BISO-HI is currently hosting an indoor league that is running concurrently in both East and West Hawaii. League games started January 6th and will run through March 3rd. Combined participation of U10 – U14 players is approximately 150 and growing. Short sided league games, 5 vs 5 in West Hawaii, are held at the Konawaena H.S. gym; 3 vs 3 Joga Bonito style in East Hawaii, at the Waiakea Intermediate School covered play court.

AYSO continues to provide an exceptional program for recreational youth soccer through out the state of Hawaii. The Kirk Banks and Volcano International Soccer Tournaments are much anticipated events.

BIL-HYSA and their affiliated clubs Ha’aheo Soccer Club and Kona Heat Soccer Club have well established programs which promote competitive play with an emphasis on training to develop a higher level of soccer skills.

BISO-HI, what room is left for yet another soccer organization? From my perspective, the primary role of the new organization is to be a catalyst for indoor soccer during the winter season. And to eventually, in coordination with AYSO and HYSA, introduce US Club Soccer sanctioned activity throughout the year.
As affiliates under the United States Soccer Federation USSF – the main governing body for soccer in the United States our responsibility is to support the development of soccer and to support each other in that cause.

During the 2006 miniBig© one hundred and twenty five dollars ($125) was raised through our twenty-five cent per ticket raffle of items donated by Eurosport. This amount was matched by the tournament and then matched once more by AYSO region 274 to become a five hundred ($500.00) donation to the United States Soccer Foundation sponsored Soccer United Recovery Fund (SURF) which was committed to rebuilding the soccer infrastructure along the Gulf Coast of the United States.

My hope is that our local soccer organizations will eventually pool their combined talents to secure the necessary resources to develop additional fields and facilities (both outdoor and indoor) for the sport around the island of Hawaii.

Mahalo to all of the individuals, businesses, and corporate supporters who continue to help make the miniBig© tournament a reality.

We are the Big Island’s largest competitive soccer club, located in Hilo, Hawaii. We strive to provide the best opportunity for your player to learn and grow to reach his or her maximum potential in the game of soccer. Learn More